VanLife: Day 5 or Minimalism and Me 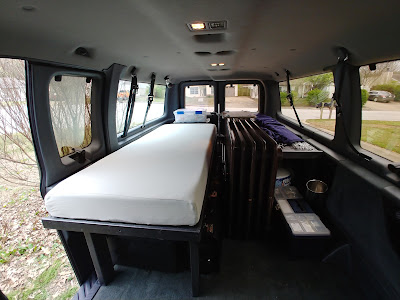 As I wrestled with space in the van today I thought of all the things I've had over the years and all the things one really needs.  Hello room, I'm a collector.

Covetousness is a branching subset representing and blending several of the Seven Deadly Sins, also known as Capital Vices.  Capital Vices, it sounds so 21st century.  Let's stick with deadly sins because they can kill you, if not always literally then figuratively at least.  They are: pride, greed, lust, envy, gluttony, wrath and sloth. Covetousness which seems to be an impetus to many of the seven deadlies is perhaps my favorite sin of all.

Now please let me explain, I don't covet in the normal sense that one might think of when we think of coveting: images of wanting to have the things your neighbor does or your friends at work do or some celebrity enjoys.  Usually when we think of coveting we think of coveting someone else's stuff.  That seldom happens to me.  I'm so finicky or some might suggest, and do, obsessive compulsive, that I seldom find things most other people like to fit into my sense of beauty/quality or offer that sense of completion that comes with possessing something you really enjoy.  No, I seldom covet other people's things.  However, it is so very true that I covet my own things!

I've already suggested that I'm very picky and that I tend to obsess over things matching, fitting, fulfilling, or otherwise pleasing my sense of form and order.  So, when I find something and settle on it, most always it's because it's ticked off all the check marks on my checklist of criteria in regard to my sense of quality.  When that happens, I covet that thing.  I've been known to buy multiples of certain items when I find things I truly see as quality because I'm just sure they'll discontinue it next season, next week, or change it in some way in the next year.  I like things and I like my things to be consistent and once again, in good order.


As a result of this deadly sin of mine, I've collected tons of stuff over the years and I do literally mean tons.  I have filled house, shops, vehicles, and warehouses full of stuff.  Not all of it treasured items but by and large much of it, in it's own context and way.  I have paid for excess storage facilities all of my adult life, culminating in ultimately having three 14' X 40' storage units, one 10' X 24' unit, and one 10' X 20' unit.  At some of the same time I had a 2000 sqft gallery full of fixtures and inventory, a church full of churchy things, a 1000 sqft home full of furniture, and almost always an SUV, truck, and or van full of miscellaneous stuff.  I must at this point give a nod to my collection of over 8000 books as well.  That was perhaps my most serious collection of all and one of my most dear collections.  I was drowning in stuff and spent tens of thousands of dollars housing it.

I honestly got to the point where I felt all of the stuff I had collected was crushing me and it was.  It was crushing the life out of me one day at a time, week after week, month after month, and year after year.

It was time to do something about all the stuff.  Dare I say downsize?  I started about 6 years ago doing just that and it has taken every bit of that time to divest myself of my collection. I hauled it away, gave it away, and redistributed it as best I could.  I sold some of it, mailed some of it, pitched some of it, donated much of it, recycled some of it, and rid myself of each piece one way or another.  It was a monumental effort that took six years and in many way continues even today.

Now I agonize over every item I acquire or keep.  It simply must check off most of my list on quality and utility or I simply don't acquire or keep it.  If something fails to live up to my expectations after being acquired it isn't kept for possible future use.  It's re-homed, whatever that might mean. 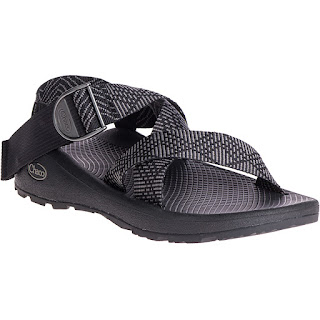 My goal is to keep minimizing as possible and at least when one thing comes in at least one thing goes away.  Today that meant pitching an old worn out pair of tennis shoes and ten pairs of socks in favor of an elegant, utilitarian, and quality pair of Chacos sandals, the Mega Z Cloud to be exact.

My embrace of minimalism has certainly offered a new outlook for me and a new rule by which I measure my life and relationship with things.  Living in a van also helps to bring that into very clear and practical focus when I stumble over things in the night and then go bump!

Posted by Brian Ernest Brown at 10:59 AM