This blog has been stirring around in my mind and heart for a long time it would seem and in reflection, my love of the humanities has forever been a part of my life I suppose. However, it came into clear focus in my high school humanities class taught by Mr. William "Bucky" Bowman my junior year.

For the most part, I consider my high school years to be a waste of valuable time and something I simply endured because I was forced to.  Had I known then, what I know now, I would have dropped out and taken my GED and jumped straightaway into college.

Ah, but as the saying goes: too soon we get old and too late we get smart.

There were, from time to time, glimmers of light and life beyond those parochial walls and I count my humanities class among them.  Two other endearing and life changing classes were to be found in my four years of Latin and two years of  journalism.

The year was 1986 and my humanities class was a pilot program that had just been introduced to the R12 high school curriculum in Springfield Missouri by Mr. Bowman who worked on the school board as well as taught within the system.  I was giddy to be part of the pilot program at Glendale.

That class opened me to the world in a new way.  It helped to begin my cognitive development in a way that encouraged me to see the interconnectedness of all things, but particularly in regard to the human experience and its development through philosophy, literature, religion, art, music, history and language. 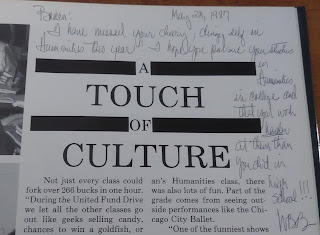 I gained a fuller appreciation of this cognitive awareness when I attended college and more especially, later in seminary.  However, it all started in that little classroom with a teacher that would admonish me, in my yearbook, to work harder in college than I did in high school.

While I have always been an ardent student I have not always been the best student. Mr. Bowman called me dingy but I prefer to think of myself as differentially distracted.

One of the things that struck me most from that humanities class happened on the very first day.  It was my exposure to a quote, which I use on the header of this blog, attributed to Publius Terentius Afer, more commonly known as Terence, a Roman playwright who lived around 170 BC.  It was inside the front cover of our textbook.

I latched onto that quote like a drowning man latches onto a life-preserver.  I wrote it down on a little piece of paper that I used as a bookmark for many, many years.  In fact, it wasn't until this last fall that I finally consigned that little scrap of history to a burn pile in an effort to simplify my life and and to embrace minimalism but that's a story for another time...

That one line quote represented to me then and represents to me now how I saw and continue to see myself.  It continues to guide and inform much of my study, outlook, and life.

As a result, I consider myself a Christian humanist of sorts.  In the world of the Christian Church I would be considered a bit of a heretic suffering from Pelagianism, a heresy named after a Celtic monk, Pelagius aka St. Morgan.

In short St. Morgan embraced, as do I, a particular view of creation that focuses on the essential goodness of human nature and the freedom of the human will but that too is a story for another time...