I post a lot of #VanLife blog posts and don't often post pictures of my traveling companion, the Kraken.  He's kinda the star of the show.  I'm simply a ride along more or less.  Here's the Kraken resting and overlooking Oregon at Deadman Pass.  He told me to take it easy on the way down.  I listened.

Today was perhaps the most momentous part of my journey to the great northwest.  It was at once one of the most beautiful drives I have ever taken in my life, one of the more monotonous, and one of the most frightening drives as well.  All of these experiences were wrapped up in one seventeen hour drive.

I started early at 6am Mountain Time.  I had a wonderful rest in Echo Canyon and thoroughly enjoyed my drive across Utah.  The vista was breathtaking and the little towns along the way intriguing.  I'm trying to learn not to rush tips and I failed in Utah.  There were several things I should have stopped to explore but I felt compelled to reach the Pacific Northwest sooner rather than later.  I will go back to Utah and spend some quality time simply exploring sometime.

And then there was Idaho...

Luckily, the bright spot during that leg of the journey was a quest on behalf of a new friend and the "Lady of the Land" where the Kraken and I shall make our home for a while we explore the PNW.  She's an herbalist and needed me to pick up some supplies for her business.  So, Twin Falls here I came!


Heading into town from the highway I crossed Rock Creek across a wonderful bridge and one the way out I stopped to snap some pics.  It was well worth the small pause.  I met a fellow wanderer under the bridge. He engaged me in conversation hoping to catch a ride but we were going in opposite directions.  I bid him safe journey and headed back the Kraken to continue mine. 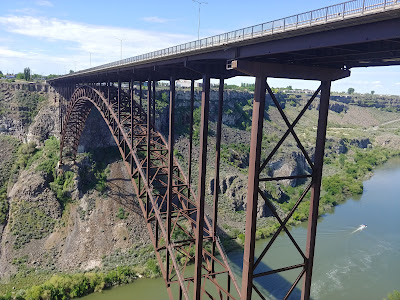 And then there was more Idaho...

I'm being too hard on Idaho.  It had its own beauty to be sure.  After all, beauty is in the eye of the beholder and I'm sure that it's a dear place to many.  Somewhere around Boise the Kraken voiced his displeasure over the journey by running a little warmer than normal.  He never overheated nor did he even come close but he did run warm.  This would be an unfortunate trend that would continue off and on for the rest of the trip.  I've made a note that he needs to go the doctor.

After Idaho came Oregon...and for quite a while it looked like more of Idaho and then, it happened!  Oregon!  I very much enjoyed the beauty of the Blue and then the Black Mountain.  Deadman Pass was also a very beautiful drive.


At this point I'll skip forward because the drive from Pendleton to Ellensberg was in 90+ degree heat and neither the Kraken nor I enjoyed that very much.  When we hit the forests and the mountains the temperature dropped and the drive through the mountains was, as I wrote earlier, the most beautiful drive of my life to date.  It was spectacular, spectacular!

Sadly I was too terrified driving through the mountains to even think about stopping and getting pictures.  I thought perhaps if I stopped, it might be for the night and I wanted this leg of the journey to be completed so I forged on.

I arrived in Port Townsend Washington at 10pm Pacific Time.  Needless to say, I shall sleep well tonight.
Posted by Brian Ernest Brown at 10:30 PM