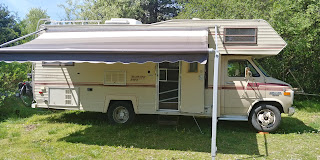 Oh my goodness, life has taken another turn on the wheel.  For me it's a time of transition, metamorphosis, and rediscovery but then that could be everyday really.

While visiting Arizona this winter, I went on a side adventure to Tucson and then to Sedona Arizona. When I returned to Quartzsite, my little world would change forever.

There was a Class C motorhome for sale in the vendors' lot where I had set up camp. It was a great temptation. It was an older motorhome but in great shape. As a matter of fact, I hadn't seen one this old in as good a shape for so little money perhaps ever.

The little treasure was a 1985 Chevrolet MRV Freeport Signature Class C Motorhome. In so many ways it was everything that I had originally looked for and hoped for when shopping for a vehicle in which to travel and stay in.

When I was originally looking for something to travel in for my glass business I was looking at Class C motorhomes but couldn't find one that suited my needs, in the condition I needed be it to be in, that I could afford. So I settled on my full-size van affectionately named the Kraken.

The Kraken was a thing of beauty and was in fabulous shape, a most handsome grey 1995 Ford Econoline E150 Clubwagon Chateau. I was able to do the build-out on the inside and make it everything that I needed it to be with a few glaring exceptions and best of all he was beautifully grey inside and out, more than 50 shades I might add.

Those exceptions weighed heavily upon me during this last year. Because of my storage needs for inventory and things for my business, my bunk had to be built a little higher off the floor then I would have liked. As a result I could never sit straight up in the van while in back. I also could not make glass in the van because there was no space to do it safely or even really at all. Entertaining was also a challenge and if I was ever to have a social life I thought perhaps I needed something larger with a full kitchen, a place for two people to comfortably dine, and more sleeping room. While I had grown used to personal hygiene practices in a van, I still felt that I would like a shower unit and the van was not conveniently conducive to that.

The Kraken had checked off all of my needs but the new motorhome seemed to check off most of the rest of my checklist in terms of both needs and wants.

I ended up acquiring the motorhome and then began to decide what to do with two vehicles, which one to sell and which one to keep as I certainly couldn't keep both. After putting them both up for sale and taking them both down several different times I ended up selling the Kraken.

It was a bitter sweet day. The Kraken had carried me on the beginning of my journey and had seen me through some real heartache and struggle. He had provided sanctuary in a topsy-turvy world in which I unexpectedly found myself. He was my safe place. He went to a good home though. A good guy who was living the #VanLife from Washington State adopted him. They will, hopefully, have many adventures together!

Everyone who knows me knows that I think everything must have a name. The new RV, however, wouldn't give me its name for the longest time and people were asking, "what did you name it?" I usually like to live with a thing for a bit while we get to know one another. Eventually the thing usually offers it's name, we come up with a name together, or a friend offers a name that sticks. That wasn't happening.

When I was preparing to leave Arizona, I started the motorhome and was pulling out. As is my custom with all vehicles I've owned, I patted the dash and said , "okay, let's get going...Milton."

It was weird but it felt/feels right. Not a name I would have necessarily chosen but Milton it was.

I have to brush up on my reading a bit. It's been many, many years since I read any Milton. He of course was the seventeenth century English poet who wrote, most notably, "Paradise Lost" and also, less notably, "Paradise Regained" among other works.

Perhaps I was channeling my anxiety about selling the Kraken and I felt that paradise was indeed lost. Who knows?! The name was a complete surprise to me. Hopefully I will find that while paradise was lost, it has also been regained.

Be that as it may, Milton is my new home on my continuing adventure.

Posted by Brian Ernest Brown at 1:21 PM No comments: