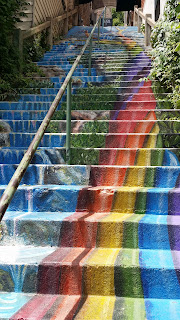 Again I find myself coming back to the theme of returning home and whether returning to a place is actually going backwards or rather a forward movement from another direction.

Eureka Springs was not my childhood hometown, that was Springfield Missouri, but I spent enough time there that I feel a kindred spirit to the funky, quaint, artsy alpine hamlet of queers and fundamentalists alike.

I spent much of the day there today and realized that feeling of belonging still hasn't left me. It's one of the very few places or perhaps the only place I have ever felt like I belonged.

I started the morning making my rounds peddling hummingbird suncatchers to several wholesale accounts. It was a beautiful day but offered the promise of getting very hot. My first couple of stops were on Bear Mountain, the mountain I lived on while residing just outside of Eureka when I made the great exodus from the netherworld called Branson Missouri.

My day was a little off kilter simply because I had planned to meet someone for lunch and when that person canceled I planned to take someone else with me on my journey but sadly that wasn't to be either. Fate or folly intervened and I was on my own, footloose and fancy free. Good enough.

I thought I'd stop for brunch at a restaurant favored by another friend of mine who has since abandoned me and moved to the great Pacific Northwest. While there was a certain familiarity there and thus some comfort, the food had changed and not for the better. Oh, there was plenty of it, just not the quality I was use to in times gone by. Be that as it may, it was sufficient and my sufficiency was fully surrensified.

If it's one thing I can't stand it's selling myself. I would not have made a good male prostitute. I have been a rep for various wholesale lines in my life and never had a problem asking for business but for some reason, when it comes to my work, it's like pulling teeth to get me to walk into a shop and offer them my artwork. Perhaps I am uncomfortable about rejection. Who knows?! So as a result I eagerly finished my chore and sold all of the hummingbirds I had with me. I laid the ground work for some follow-up orders and then went off exploring a town near and dear to my heart.

Now for me, exploring Eureka Springs is like someone exploring the back of their hand. I have been all over that town over these last forty years. Sometimes there's a new shop to see and sometimes someone has painted their house a different color. However, other than those two situations, things seldom change in the little town. Yet again, I wasn't disappointed.

While my outward exploration seldom offers anything new I guess I go there for the inward exploration that Eureka Springs offers me personally. It gives me a place from which to gaze backward and then to gaze forward within the realm of familiarity. I did a lot of that while I was there today. I visited many of the springs, spending time at each one in thought and in prayer and visit two of them at least twice before I packed up my doll rags and headed home to Fayetteville. 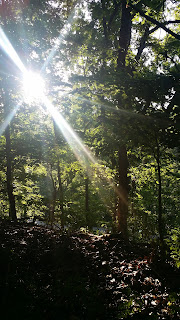 Living in Fayetteville and spending a lot of time on the bike trails I take a lot of pictures. Few are ever inspiring to me, though I try and I try. I have spent two years in Fayetteville trying to get a "sunbeam" picture and have yet to do it. In Eureka today, the opportunities were limitless and I took advantage of several of them. What I ended up with were some pretty inspiring pics, for me anyway.

My only frustration in the whole day was when a family visited my favorite spring. They were loud and very out of place visiting an underground spring. They cried about spiders, the cold, the dampness, and they poked fun at the sacredness of the space by blowing out the candles that usually burn twenty-four seven, lights that shine in the darkness, lit by loving folk.

As if that wasn't enough, they lit up and smoked cheap cigarettes in the spring. I had to spend some time praying down my wrath. I hope they had a pleasant visit but in the words of Forrest Gump, that's all I have to say about that.

While I was visiting, I was also calling about various shops for lease, partially out of habit and partially out of simple curiosity because you never know. I was just heading up Mountain Street to where I had parked the Blackbird when my phone rang. It was a shop I had called about earlier in the day. The landlord was a venerable shop owner in Eureka Springs with whom I have spent several hundred dollars in years gone by. He wanted to show me the space I had called about. I trotted back down Mountain Street to Spring Street and made my way over to the shop for lease.

Not only was the shop space perfect but the landlord was very gracious and solicitous of me and my artwork, thinking we were a natural for the little burgh. I have to admit that it was and indeed is tempting. The space itself is perfect in many different aspects. I couldn't ask for a better space for the money. What's perhaps even more important, I couldn't ask for a better landlord. A door has definitely been thrown wide open for me and all I have to do is walk through. The temptation is great. 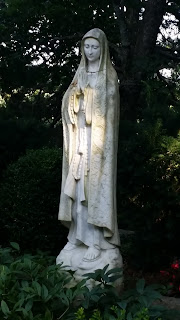 So now I ponder on what direction my future is to embark upon. My dear mentor, Fr. Martin, told me to always watch for open doors and so I have. This last year I have had door after door slam shut in my face, many of them personal, a couple of them ministerial, and some of them professional. Much of my life has changed as a result but I have yet to experience an open door in the last two years. Today's experience was a clear and present open door invitation and I don't take that lightly. I don't yet know what it means and I don't quite know what I'm going to do but I am definitely paying attention. As I always say, time will tell the story and indeed time is a great tool of discernment.
Posted by Brian Ernest Brown at 1:08 PM