Can You Ever Go Home? 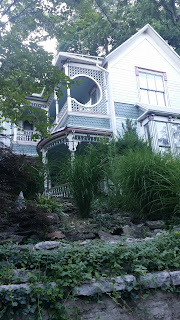 Can you ever go home? Conventional wisdom seems to say no, you can never go home. Such wisdom would suggest that once you leave, things change and try as you might it's awful hard to find your way back to that which you left. Such is the state in which I find myself...

I visited Eureka Springs Arkansas today, as I had an order of blown glass hummingbird suncatchers to deliver to a shop over in that neck of the woods. It was a gorgeous day, even it it was a tad bit on the sultry side and the drive through the Ozarks Mountains was refreshing and inspiring as always. I concluded my business in the afternoon and headed to Eureka Springs to try and entice a few shop keepers and gallery owners to purchase some of my art work.

Eureka Springs is a little Victorian oasis nestled on the side of Crescent Mountain in the Ozarks of Northwest Arkansas. Now, truthfully, Eureka encompasses more than the historic loop which winds its way up to the top of Crescent Mountain but that's the heart of the hidden little hamlet.

It's rich in history, eccentricity, art, crafts, Christian fundamentalism, commercialism, beautiful geography, magical springs, Pagans, Wiccans, Faerie, hippies, nudists, and it's as queer as a three dollar bill! It has been called the San Francisco of the Ozarks and rightfully so, what's more, it flies its colors with pride. We even have our own version of the Golden Gate Bridge! 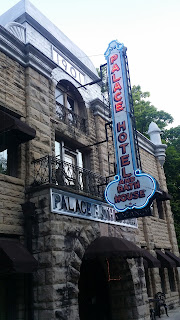 Eureka has been a tourist town since, well, forever I suspect, and over the years the demographics of the tourists that visit, as well as those folks who call it home, have changed as the times have changed but it's always been a melting pot of sorts. The factions have lived in civility for the most part and blended nicely to make a flavorful soup. We are, after all, Southerners, and that counts for something. And like that statement, Eureka isn't always what it appears to be at any given glance and you have to peel layer after layer to sometimes get to the heart of the artichoke. Are we talking about artichoke soup?

What's more, with perhaps one exception, I have always taken the loves of my life to Eureka Springs, of which there have been several. It's like some sort of romantic rite of passage for relationships of mine. I've been married in Eureka Springs and I've honeymooned in Eureka Springs, not with the same spouse both times. The one exception to this eros-sian rendezvous was a wonderful girl who lived in Michigan and with whom I fell madly in love one frigid evening in downtown Chicago. We were teenagers at a high school journalism conference, loose in the city, looking for adventure, and we found one another. It was teenage love but alas we never made it to Eureka Springs together. Who knows what would have happened had we made that pilgrimage of the heart?! Probably charges of kidnapping and transporting a minor over state lines or some such nonsense but that's another story.

I think I've explored every square inch of Eureka Springs and most of it multiple times. It's my go to place when life is being life and not what I think life should be. It's my place to regroup, to rethink, to re-purpose, to reevaluate, and somehow I always manage to find myself again when I visit. Perhaps it's because I left a little part of my heart there forty years ago when, as a child, I discovered the magical place of my dreams. 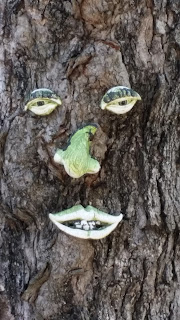 The Eureka of today is somewhat different than the Eureka of my childhood. The "dragon trees" are still there and the candy store where we would procure the giant jawbreakers is still there - with a taffy machine in the window working on the same pull of taffy it was working on all those years ago. I've had a love affair with that city for perhaps forty years. The Eureka today though has become a mecca for the motorcyclists and not just a couple of them, all of them. Of all the different folks who have taken up with Eureka Springs, the motorcyclists are my least favorite. Not that I don't care for them as people, though there are some who try my inclusive little heart, but I hate the noise pollution. The noise alone shatters the sacred and unhinges the heart.

Anyway, I ventured back today, partly because I wanted to hit up the shops and galleries for some business, partly because it was a beautiful day and like a homing pigeon on such days, I just head that direction, and partly because life has been kicking me around a bit lately and I needed some time to be there. I didn't spend nearly enough time there and plan to go back in two days to spend more time.

A couple of years ago I fulfilled a dream to move to Eureka Springs. I had always wanted to live there and just knew that if I ever did, I would be in heaven. I really did love it and maybe more than I realized at the time but for several reasons, none of which I'll go into in this blog post, after a year of living in Eureka Springs on Bear Mountain, I moved on to Fayetteville Arkansas, a place I call the Promised Land. 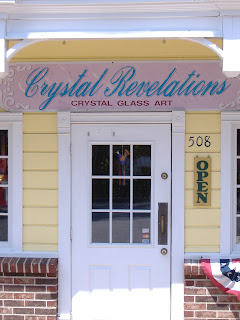 Since that move I have toyed with moving back to Eureka Springs. It always calls to me and has always done so. I suspect it will never be silent, being a place that resonates with my soul on some deep level. Today when I was there I kicked around where my old studio use to be and to my surprise it was empty - my heart fluttered! Could it be? Could I move back and have my old studio again? Really? Oh, it seemed too good to be true and it was.

The complex where my studio had been is now owned by Harley-Davidson. Across from where my quaint little Victorian studio was now sits a big fat in-your-face Harley-Davidson shop flanked by a smoke shop, a tattoo parlor, and Bud's Beers and Brauts. What's more, half the parking lot was dedicated to "motorcycles only" and had been sectioned off with gates and warning signs. Hardly the neighborhood for me. The noise alone with drive me to fits.

My heart sank...and I left...I really couldn't go home after all. 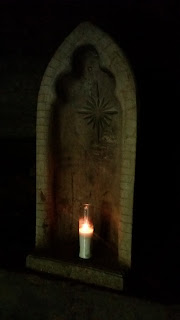 After that rather shocking discovery I made pilgrimage to the Holy Hill where I visited some dear friends at a delightful place called Hillspeak, an Episcopal retreat center of sorts with books galore. I was blessed with the most delightful conversations and I had a particularly wonderful conversation, as is always the case, with one very dear friend. She is perhaps one of my most favorite people in my beloved little alpine village and we laughed and carried on as only we know how to do. By the time I left I had almost forgotten about the motorcycle scourge that is spreading throughout Eureka, almost.

I'll return in a couple of days and I plan on giving the Harley people a wide berth. I'll wander the Carthage stone streets, climb the hills, and visit the sacred springs. I doubt I could go back to live but I will go to visit my heart.
Posted by Brian Ernest Brown at 1:49 PM