Does That Thing Even Run? 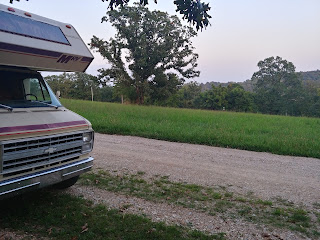 For the most part, my last year and a half living in a rolling home has been amazing, memorable, and for the most part the people I have encountered have been kind, hospitable, encouraging, and even envious.

Sure, it's had its challenges, trials, and tribulations.  There has been a series of repairs, though no breakdowns which stranded me.  I switched vehicles in mid trip which was a journey in and of itself.   There have been some health challenges which seem to have been mollified for now. There have been longer than unexpected layovers where I spent much more time in one place or another than I had anticipated. And some of the shows and sales I have had haven't been up the financial levels I am use to.

However, all in all, my surprise life in a rolling home has been an adventure I wouldn't trade for anything and one I would recommend for almost anyone wanting to learn more about themselves and the world in which they live.

And then there are moments that just make me shake my head...

During my continued and extended stay in the Ozarks Mountains I rolled over to a retreat center/ministry place I have a deep and loving connection with.  The people who run the place are absolutely the best and I count them as dear friends.  Their hospitality, generosity, and kindness is the kind one rarely finds in this old world of ours but one often shared in these here Ozark Mountains.  These folks and their ministry are a blessing to me in every sense of the word.

I had been staying there in my motorhome, Milton, when a wedding party booked all of the lodging facilities on the grounds.  This didn't really affect me as, in the lyrics of an Arlo Guthrie tune, I was boondocked "off the side of a side road" and was in fully self-contained mode with no hookups, nor need.

I had been out and about on the town with a friend, when we returned to the motorhome to find a fellow wanting to speak with me.  He was with the wedding party.

Now let me say, never wanting to be a burden, I had checked with the team at the center to see if I needed to move off the grounds to make room for anything or anyone from the wedding party. They had assured me that I was fine.  I reiterated yet again my offer to vacate and they assured me everything it really was okay for me to stay there. Being parked barely off of a gravel road leading to several houses down the street and plenty of distance away from any loding or building and completely out of sight of the wedding circus tent they were raising, I thought I was in a pretty out of the way place.

This fellow with the wedding party didn't think so.  He said that they were going to use that area for parking.

Now, my motorhome is a mini motorhome.  It's five feet longer than a conventional full sized van and  at twenty-two feet, just one foot longer than a 1972 Oldsmobile Delta Eighty-Eight Royale Convertible that I use to own. Milton takes up a single parking space and a half.  For an RV, he has a small footprint.

"Do you really think that a parking space and a half would make a huge difference in the parking spot availability?"

Seeing the logic in my question he shifted tactics...

"Well, the bride and groom want to take some pictures with an uninterrupted view."

"And a grassy knoll parked with the cars, trucks, and vans of wedding guests wouldn't obstruct the view?"

By then I knew what was up, they simply objected to the motorhome itself.  Milton is an 1985 model and though he's in good shape for his age, he is not, however, the most beautiful boy at the dance.  I find most motorhomes and RVs to be terribly ugly and older ones can be even more so.  Milton might not be the most beautiful boy at the party but he ain't the ugliest one either.  One might gently describe him as homely, a fitting description since he is my home.

I quickly kicked into patronizing wide smile mode and was in the process of assuring him I would move and that it would take me a little bit of time to have everything ready to go, when he asked a question that triggered no small amount of egotistic irritation in me.

"Does that thing even run?"

I didn't say what went through my mind at that point.  My southern manicured manners wouldn't allow it. I won't even write it but instead I'll leave it to your colorful imagination.  I had previously turned around and was getting ready to climb in Milton to ready him for departure but this fellow had hit a nerve in me and he now warranted my full seething attention so I slowly turned back around.

As I turned I let slide across my face the most southern deprecating smile I could muster.  One that spoke volumes - with curled lips and almost fiery glaring eyes. One that would make small southern children quake in the realization that they just had just crossed a point of no return with their teacher and had better retreat quickly.  One that would make Pastor John rethink his refusal to the invitation to Sunday dinner from Sister Margret when they shook hands after the service.  I think I even straightened my shoulders and squared them off a bit when I offered,

"Why, yes of course he runs!  I've traveled in him quite a few places and in fact I live in him.  I am a longstanding visitor and guest to this place and am here, like you, with permission."

My ego got the best of me and to my shame I pointed out that not only was I a frequent guest and visitor there but that I had also, at times over the years, held mass there in the chapel and conducted other gatherings and retreats on the grounds.  I am ashamed of this part of the conversation as the proper and humble thing was to simply say nothing but smile and move on.  However, my perception at the time, rightly or wrongly, was that somehow he was treating me less than and talking down to me and that poked my usually slumbering ego into waking.

At that exchange the fellow looked at me differently and began to backpedal, trying to offer several alternative parking places for me, none of which would have really worked for the wedding party or for me but he was trying, bless his heart. He now looked a little less condescending and aggressive and perhaps even a little penitent and I dare say sheepish.

Inwardly I smiled at his new found humility and as quickly, felt revulsion and guilt at my own shameless display of peacockery.  I recovered my sanity and stinging with disappointment in myself, smiled tiredly and gently said,

"Well, that's neither here nor there.  I'll gladly move just give me a few minutes."

I told my friend that I'd be ready to go in a few and where I planned to rendezvous with her to figure out where to head next.  To my friend's ingenuity, and while I was readying Milton to move and the wedding fellow was still trying to find a compromise, she called her landlord, whom I had previously met, to see if I could simply park in the driveway overnight.  The lady and lord of the land graciously consented and we were off.  My friend and good old fashioned Ozark Mountain hospitality had saved the day.

In VanLife or RVLife people in more traditional homes and living circumstances can sometimes and often do, refer to us as homeless and I think they honestly see us that way.  They question our quality of life, the sanity of our choices, and often try to project their own needs, desires, and insecurities upon us.  People have even suggested I am punishing myself by living the minimalistic lifestyle I live.  Nothing could be further from the truth.

I always counter with: I'm not homeless, my home just rolls where yours stays in place.  And with: I'm not deprived at all but quite the opposite, I feel like I live a decadent life of comfort, freedom, and ease.  They then almost always ask solicitously, "But you really want a real home don't you?"

The maybe unconscious condescension in these types of questions and assumptions sometimes challenges me.  It did so during this encounter. It may have been my own projection onto this fellow with the wedding party and I own that but it seemed to me that he began the conversation treating me as a seemingly homeless person in a broken down vehicle who was something to be pushed aside from the view of the bridal coronation that was to take place.  As something less than.

The whole exchange has offered me the gift of introspection.  After all, the only thing I can honestly do is to look within myself for a change in my own heart, rooting out my own insecurities and my own stinging pride and to change my own reactions when such encounters happen and they will always happen while I choose to live in a real home which just happens to be on wheels.

The wedding party fellow was only acting out of ignorance, wedding stress, and within a construct of societal norms and projections.  All of which were temporary, forgivable, and able to be addressed within the context of mind-expanding education.  He gave me a great gift though, one of self-discovery and exploration, and for that, I thank him.

It also gives me further insight into how people treat others who unlike me and those of us embracing this #VanLife or RVLife lifestyle may have been forced into a living situation such as ours, and how those unfortunate people may feel with the kind of condescension that often comes from others in regards to their forced lifestyle.  That's another gift of this encounter, one of broadening and deepening my empathy and again I'm thankful.

Hopefully, in the future, I will be more sensitive to everyone concerned with this kind of issue and in this kind of encounter.  Until then, I'll work on my own ego and tendency to project.

I will also work on my deprecating southern smile. I don't really think it was withering enough!  More evidence that I've spent too much time in the northern states.

Happy trails!  Do what you love and love what you do!
Posted by Brian Ernest Brown at 11:25 AM