Day #472 #VanLife: Minimalism and Freedom or VanLife vs. RVLife 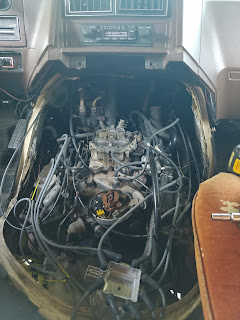 Living in a Class C Motorhome is anything but simple at times and though I have many, many fewer possessions than I had when I began this journey, I feel less like a minimalist living in larger rolling house.

There's an old saying, less is more and there's so much truth to that.  As I've been continuing to downsize and minimalize, I'm coming to appreciate that truth as it translates within my reality.  Nothing could illustrate the point better than my recent adventure in moving from a full size van into a Class C mini-motorhome. 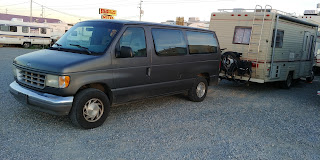 I started out this adventure in a 1995 Ford Econoline Chateau Club Wagon, the Kraken.  I spent a good deal of time working on a build-out in the van in which I could live when I did craft shows.  I meticulously engineered my build to meet my specific needs which was heavy on storage in order to store my tools, raw materials, displays, and inventory for being a traveling glassblower.

Now it's important to note than when I was getting ready for this adventure it was only going to be a part time gig while I was traveling doing craft shows.  It beat paying for hotel rooms and insured maximum profitability for me.  However after 6 months I returned home to a failed relationship and a completely new reality for my life going forward.  That's when I started evaluating #VanLife and what my needs going forward were or might be.

I spent another 6 months in the Kraken living in it as a home.  It worked in very many ways but there were a few things that were troubling.  I couldn't sit straight up unless I were sitting in one of the front seats, I absolutely couldn't make glass in side the van, and my climate control was fine for cool to cold weather but during hot weather I didn't have air conditioning or even screened windows to open.  It was also hard to entertain in the van.  It was a cramped space really only built for one. Now, it's not like I have an exciting social life but one always hopes for the possibilities and I do like to cook dinner for friends et cetera.

Years ago, when I was married I traveled in a Class C motorhome with a wife and three cats.  We traveled doing much the same thing I have been doing this last year, making and selling glass.  It was a 24ft older motorhome and lacked some of the creatures comforts of other similar RVs in better condition but I really enjoyed it.  My wife did not.  We eventually returned to living in a stationary house with all the bills and all the responsibilities that come with.  One year later my wife lamented leaving the road because "life was so much easier and sweeter in the motorhome."  Too soon we get old and too late we get smart.

Having had that early experience of traveling and living in a Class C motorhome I always thought in my mind that that was the perfect situation for me as a traveling glassblower.  I could work in one, live in one, sell from one, travel in one, and even entertain in one and all in reasonable comfort.  (Wow!  While typing this I keep thinking to myself, this sounds good and the option I should focus on!) 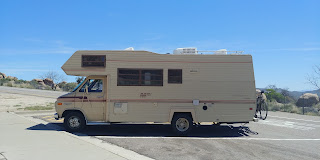 I was in Quartzsite Arizona when I first saw the RV of my dreams, a 1985 Chevrolet MRV Mini-Motorhome.  So when the opportunity arose to turn seven hundred glass hummingbirds into a 22ft Class C motorhome I jumped at the chance.  "Milton" became mine.

Everything worked in him and the roof didn't leak.  The refrigerator was new, to the tune of over a thousand dollars.  The generator was practically unused and Milton had been obviously cared for all of his life.  He also had half the miles my van had on it.  His awning was great and he had a new mattress in the full size bed.  Even his tires were pretty new.  All in all, he was a great vehicle and home.

I danced back and forth on whether to keep him or not.  I didn't go into this change of lifestyle blindly. Because of my former travels in in a Class C, I knew of the added expense in gas, oil, and fluids for travel; I knew of the greater cost of repairs not only in regards to the "house" part of the vehicle but also in regards to the mechanics of the aging van part of the vehicle; I knew of the parking challenges and I knew of the driving challenges.  I understood how greater luxury would mean less freedom because I would need more money for this new living arrangement and to make more money I'd have to work more, making and selling more glass.  Being more of a slave to money meant less freedom.  I knew all this and still I chose the new RV. I tearfully sold the Kraken and embraced my new life.

My gas mileage has been predictably bad but then I am comparing it to sixteen to nineteen miles a gallon in the van and so four to eight miles a gallon in the RV is terrible.  So far, my repairs have exceeded the amount I spent on the van the entire time I owned it and when I sold it the van was in pretty good condition.  I am even now at this writing struggling with an engine repair that may be more serious than I thought at first.

There's no doubt about it, moving into Milton and selling the Kraken has slowed my journey to a standstill.  If it's not the cost of repairs then it's the cost of fuel.  I'm not sure I continue to want to trade my freedom for some creature comforts or conveniences that aren't critical to my enjoyment of life on the road.

Embracing minimalism has taught me how little I need to be comfortable, content, and indeed happy and how needing so very little gives one a greater sense and reality of freedom.  I've also realized that I crave freedom much more than I do excessive comfort or material things.  This has been a lesson well learned.

I may or may not move back into a van but I know now what its critical to my comfort and what is needed for my space.  Time will tell the story...