Who Does God Hate? 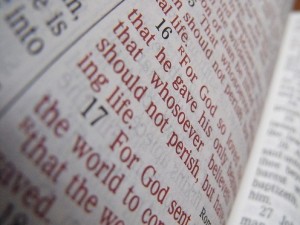 I was thinking about the quote from Anne LaMott I posted the other day on my Facebook page. I noticed folks copied and pasted it all over the place.
Here was the quote:

“You can safely assume that you’ve created God in your own image when it turns out that God hates all the same people you do.” -Anne LaMott

It really started some good conversation and such. I then happened upon something dealing with that atrocious group, Westboro Baptist Church and their GodHatesFags website. I see now they’ve branched out into selling t-shirts and other things online. In fact I saw something that just broke my heart. They’re selling t-shirts that are children’s size that say “God Hates Fags.” How would you like to see a child wearing such a thing?

Their hate speech isn’t limited to “fags” but all kinds of folks whom they see as different and falling outside of not only Christianity but also God’s love. I have seen this hate group grow over the years due to power of fear, ignorance, and hate and or people’s apathy. I don’t know how many hate filled websites they have but others include GodHatesIreland, GodHatesAmerica, and the list goes on. I’ve seen them speak out about Jewish folks, political leaders (usually democrats), being publicly thankful for dead soldiers, thinking 9/11 was a blessing, et cetera, et cetera, et cetera.

Surely this is just a fringe group you say. Well, no, it’s a pretty large well coordinated group with deep pockets. Unbelievable. But it all stems from the preaching of hate. Remaking God in their own image and transposing that image on the world around them.

God hates this, God hates that. This person or that group of people are an abomination to the Lord. God can’t love you because he loves me and besides, you’re a sinner because I say so.” Blah-da-blah-da-blah. And through the machinations of preachers and churches who preach things like this, the Christian church slips further into irrelevancy and idiocy and the Gospel Message of love and inclusion meant to heal this broken world is lost.

That’s the slippery slope when we preach hate and intolerance of a person or a group of people and sadly our churches are full of that kind of anti-Christ type of message.

We’re tempted to look at Westboro Baptist Church as a vocal extreme and certainly not like the average Christian church in this country but I would say that any church or preacher that preaches hate is just as culpable of distorting the Gospel Message and harming the universal church even if it is a single topic of hate they’re preaching on. Lest someone think I’m picking on the conservatives here, I am not, would be liberals do the same sort of thing when they seek to exclude folks who don’t believe exactly like they do from God’s love, care, and fellowship.

Another quote I posted on my Facebook the other day:

“I swore never to be silent whenever and wherever human beings endure suffering and humiliation. We must always take sides. Neutrality helps the oppressor, never the victim. Silence encourages the tormentor, never the tormented.” -Elie Wiesel

As Christians I think it’s our duty to stand up against such hate speech, bigotry, fear mongering, and evil. As followers of the Prince of Peace it’s our duty to stand with the meek, help the suffering, come to the rescue of the thrown-aways, and love those who have been labeled by others as unlovable. To do any less is to spit in the face of Christ.

A dear friend of mine, Fr. Sean Lotz of the Celtic Catholic Church penned an excellent paper in response to the Westboro Baptist Church’s stance of GodHatesFags. Fr. Sean asks the question: Is It True That God Hates Fags?

Fr. Sean Lotz in his article while discussing the protesters signs of “God Hates Fags’ and “Matt Was a Sinner” (referring to Matthew Shepherd, a gay young man who was viciously beaten to death and whose funeral was picketed by members of the Westboro Baptist Church) says:

“Fortunately in the midst of this wrongness and cruelty was one small glimmer of humor. One of the protesters carried a placard that proclaimed, “Matt was a sinner.” It may as well have said, “It’s cold out here in the snow.” We already knew that. Of course, his sinfulness resulted not from his being a homosexual but from his being a fallen human like all the rest of us.

Except for that last self-evident statement, none of their theology is right, none of it is the Gospel. None of their behavior can be called the will of God. But it seems to me that the most evil sign of all was the one that read “God hates fags.” This is the theology of hell, and the author of this sentiment, a prophet of Satan himself.

To understand that such a sentiment could not possibly have come from God, consider Matthew 5:22.

Now the Aramaic word which is transliterated into the Greek as raka/, and generally translated into English as “fool,” carries with it a whole equipage of Aramaic connotation and Jewish thought. To the Jews, the concept of “fool” did not mean someone of limited intelligence, but rather a person of deficient morals.

And the word raka/ was, please notice, a word of derision, an insult, not a technical term. The same with mwre/. Although a Greek word, it had been used by the Jews of Jesus’ time to indicate a fool, but with added overtones of “traitor,” especially a traitor to the generally accepted moral code. And it too was a term of contempt and derision.

It is impossible not to see the similarity to the English word “fag.” And it is impossible to believe that the same God who, through his Son who died on the Cross for us, taught that those who dismiss God’s creatures with stereotyping words of contempt shall be liable to judgment, would approve of his sacred Name being used in the same sentence with such an ugly word of derision as “fag.” This sign was not just rude, not just wrong, but a direct violation of a clear principle taught by our Lord.

But there is more. What reveals this statement as not just non-Christian, but actually anti-Christ, is the word “hates.” Saying that God “hates” any of his humans is to deny the very activity of Christ and the basic nature of God. It is blasphemy of the highest order.

Certain Christians are fond of finding isolated verses of Scripture that they use to prove almost anything. Doing this, it is quite easy to show that God hates individuals or groups of persons. But Scripture must not ever be read this way. Nothing in it makes sense unless considered in the total context from Genesis to Revelation. ”


I recommend you read Fr. Sean’s entire article. You can catch up with him at the Celtic Catholic Church. It’s certainly well thought out, well written, and if you’ll pardon me, the Gospel Truth.

No, hate, vindictiveness, fear mongering, bigotry, self-righteousness, spiritual terrorism, and evil have no place in the Christian Church nor should such things come from “ministers” of the Christian faith. Such things are anti-Christ.

I am glad that our communion, Christ Catholic Church, and specifically our little ministry here in the Ozarks is a little different than the norm out there. I’m thankful that our little group of believers in Archdiocese of the Prince of Peace is committed to a message of Love and inclusivity regardless and we hold firm on that message of welcoming love. On our website you can read:

“We Are Inclusive: Believing as Saint Isaac of Syria, “Do not try to discriminate the worthy from the unworthy, but let all people be equal in your eyes for a good deed,” we do not discriminate and hold no regard for a person’s race, color, age, gender, sexual orientation, preference, nationality, socioeconomic class, nor a person’s state of grace. We are fully committed to inclusivity and our support for the LGBTQIAPP (lesbian, gay, bisexual, transgender, questioning, intersexual, asexual, pansexual, polyamorous) and anyone who would seek to find a spiritual home within Christ Catholic Church is unwavering and unapologetic.”

If you feel like discovering a kinder and gentler way to express an authentic Christian faith of hope, love, inclusion, and reconciliation won’t you give us a a try? Visit Christ Catholic Church We welcome not just some of you, but ALL OF YOU!
Posted by Brian Ernest Brown at 9:57 AM