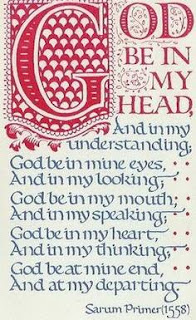 Recently I had the occasion to dialogue with a young priest in the ISM (Independent Sacramental Movement) on Facebook. While he wasn’t necessarily young in age, he hadn’t been ordained long.

The conversation started with some folks talking about the need for better training for clergy in the ISM, or rather, perhaps more accurately, they were picking apart an ISM seminary long ago closed.

They disparaged much of the nonsense that goes on in the ISM in regards to clericalism and lack of education and in those regards I would agree with them.

I certainly agreed with most everything they said and have said as much myself many, many times over the years, and yet out of the ISM, there are still good folks of deep faith out there doing good works and making a difference in this broken world by sharing the Gospel Message.

Where I disagreed with them was in their conclusion that the only legitimate way forward was to ordain only those folks with an accredited Master of Divinity.

What was particularly and delightfully demonstrative of my counterpoint in the conversation was when the young priest touted his own degree from Yale Divinity School, I believe, and then asked what the acronym “ISM” stood for.

I asked the young priest about his affiliation and he said, “I’m not an independent, I’m an Anglican priest.”

He could have been an Episcopal priest, meaning a member of the clergy in The Episcopal Church of the United States and that might explain his ignorance of the ISM acronym but I doubted it and so I pressed on.

After more questioning I discovered he was a part of a group that claimed to be Anglican but was not a part of The Episcopal Church nor in communion with the wider Anglican Communion.

I gently corrected him, educating this graduate from Yale Divinity School, that he was indeed a part of the ISM. I stopped short of pointing out that he wasn’t Anglican at all unless he was in communion with the greater Anglican Communion. The reality of the fact would have fallen on deaf ears.

His ignorance underscored my point that we, in the ISM, must train our own and not rely upon the mainstream educational institutions to do it for us. Simply put, they don’t know who we are or much about our own venerable traditions.

I’ve said all of that to say this:

Our validity will never be found in goofy titles, silken vestments, and photo-shopped pictures. However it won’t be found in academic degrees, accreditation, and professional credentials either. We mustn’t fall into the trap of shunning one set of contrived trappings and yet embracing another in our grasp for legitimacy and validity.

Our validity as ministers of the Gospel will only ever be found in our servitude to Christ and our compassionate and loving ministry to our brothers and sisters and in our continual work to make manifest the Commonwealth of God here on earth.

Many of us may not be perfect but we try at least to be faithful.
Posted by Brian Ernest Brown at 6:18 PM