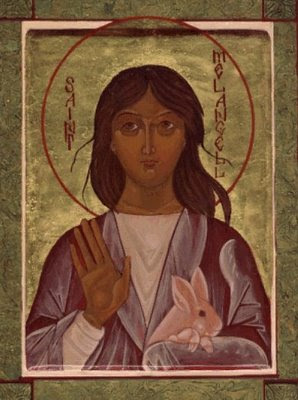 This website/blog is dedicated to Saint Melangell, a long time patron saint of mine. She’s a wonderful wandering Celtic saint that spent her life trying to make a safe place for folks amongst the thorns, thickets, and brier patches of society and of the world.

The Legend of Melangell and the Hare


There is a legend that survives from long ago, known to Welsh school children who have learned it from their mothers’ lips. The legend concerns a maiden, an Irish girl whose father had arranged for her to marry a chieftain back in 607 CE. She did not want to marry this chieftain – he was old and she was young. She joined a band of Irish hermits who came across the sea to preach the Christian gospels to the Pagan Welsh. The maiden’s name was, in Latin, Monacella. In Welsh it became Melangell. She traveled to the Pennant Valley, in Powys, in the 7th Century and lived in a cave in the hillside.

One day Brochwel, mighty Prince of Powys, was out hunting with his men and his hounds. The hounds raised a hare that took refuge in a thicket. The hounds were urged on but fled howling. Their huntsman raised his horn to his lips and was unable to remove it. On pursuit, the Prince found a young woman standing there – the hare had run under her long skirts to hide. The young woman told Brochwel that she lived in the valley, where she had come to take refuge. The Prince was so impressed by the young woman’s godliness, that he granted her the valley as a sanctuary for people and animals. Here she founded a religious community. 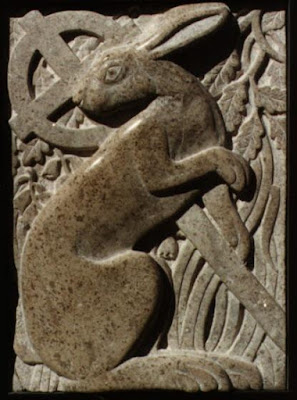 
The Life of Saint Melangell of Wales (+ca. 590) ST MELANGELL (whose name has been latinised as Monacella) is interesting because the incident for which she is known is a Welsh version of one that is known in various forms in several European countries. She appears in the pedigrees as a descendant of Macsen Wledig (the usurping Roman emperor Magnus Maximus), and according to her legend her father was an Irish king (probably Scottish, in its later meaning, is intended). She vowed herself to God, and when pressed to marry fled to the part of central Wales called Powys, where she remained hidden for fifteen years.

Then one day the prince of Powys, Brochwel Ysgythrog, came hunting in her neighborhood, and pursued a hare into a clearing of the forest where Melangell was at prayer. The hare ran for the shelter of her garments, and turned to face its pursuers from a fold of her skirt.

Brochwel urged on his hounds, but they drew off, howling; the huntsman tried to wind his horn, but it stuck mute to his lips; and Brochwel approached the girl for an explanation When he had heard Melangell’s story of herself, he made her a present of the land on which they were standing as a “perpetual refuge and place of sanctuary”, in recognition of God’s protection of the ” little wild hare” in the shadow of His servant Melangell.

Accordingly she lived the rest of her life there, another thirty-seven years, gathering a community round her which she directed as abbess. But it was also a meeting-place for hares, who never showed any fear of their protectress, so that they came to be called “Melangell’s lambs”.

The church of Pennant Melangell in Montgomeryshire claims to stand on the site of this happening, and it formerly contained St Melangell’s shrine. It still has some medieval carvings relating the story of the hare, and the shrine chapel at east end.
Posted by Brian Ernest Brown at 8:14 PM