Splinters, Blisters, and a Build-Out, Oh My! 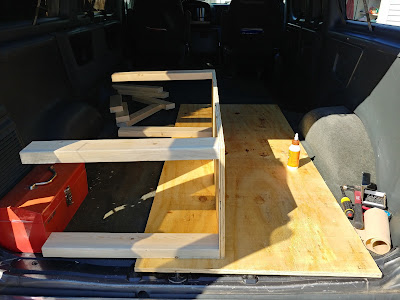 Had I known, I think I would have purchased a Class C RV.

Armed with a screwdriver, a hammer, some nails, some glue, and leftover paper towels I went to work.  Lucky for me, my measurements and the cuts that the helpful guy from Home Depot made were all spot on.  That made the job less troublesome to be sure.

I started with the table.  It was smaller and a little less complicated than the bunk and yet it was pretty close to the same kind of structure.  However, if I was going to go through a learning curve, I wanted it to be on a piece of furniture I wouldn't be trying to sleep on at a later date that could fall apart in the middle of the night if I shifted my weight the wrong way. 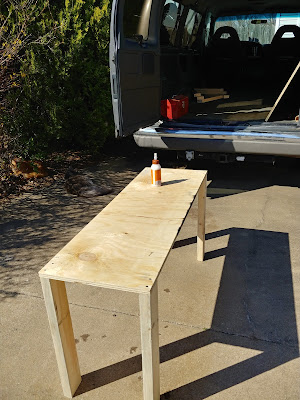 The Gorilla Wood Glue was amazing and money well spent.  I suspect it made up for some of my lack of carpentry skills.  Only time will tell how well it holds up, or holds me up, as the case may be.

With only a few challenges, the table pretty much went off without a hitch.  However, I did see a pattern emerging...  One in the palm of my hand from the screwdriver.  It was called a blister!

The bunk build was larger and more of a challenge in terms of logistics.  Due to its size it weighed more and due to my size I wanted at least six legs on it to hold me up.  My hands were already tired from screwing around with the screws and blisters were forming.

Please remember, "Damn it man, I'm a glassblower not carpenter."  That never gets old. ;-) 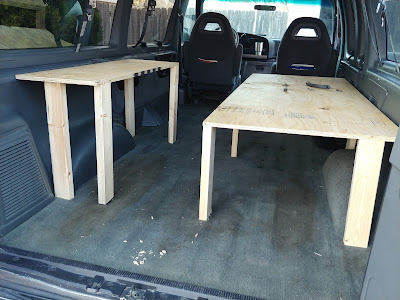 Now that they were basically built I needed to do a little trim work on the furnishings with some 1" X 3" wood trim.  This would further secure the pieces and help prevent slippage by anything that might be placed on top of their respective surfaces.

My hands were pretty well torn up by this time so I borrowed a rechargeable drill.  It made the work go that much faster but let me just say, they sure don't make drill bits the way they use to! 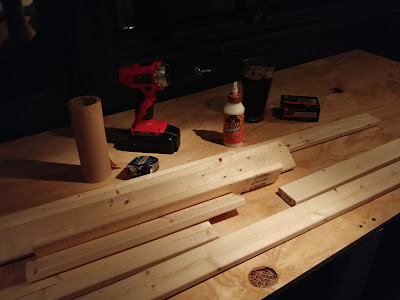 All in all, I'm glad I built these items instead of just buying something already created.  It is, after all, part of the journey of #VanLife and now I have a good story to go along with my blisters and splinters.  More importantly I know that while I'm a glassblower damn it and not a carpenter, I can still turn a screw.