VanLife: Day 6 or The Shoes of the Fisherman 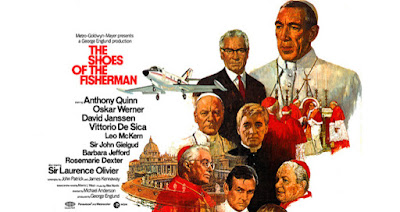 Today was Sunday and that meant going in later to the glass shop, Crystal Revelations, and getting off earlier because the mall's hours are shortened on Sunday.  Most malls in the United States follow this pattern: opening around noon and closing just before dinner time.  It's a throwback to the old Blue Laws that were in effect for many years which either prohibited outright or limited shopping on Sundays.  I always look forward to Sundays in malls because of that.  It's almost like a day off.

After work and a lite dinner and retired to the Kraken.  For the first time since I've been in the van, I felt like watching a movie or something on my Chromebook.  Always before I've tried to be very quiet because my windows were open and I didn't want to draw any attention to myself nor the van.  Last night I finally felt comfortable enough to do the movie thing.  There was no popcorn but it was a swell movie on a fantastic screen.  Being only a few inches from my face it seemed like an Imax theater screen!

The movie I settled on was an old favorite, "The Shoes of the Fisheman" a 1968 film adapted from a novel of the same title written by Morris West.  In short it's about a newly elected Roman Catholic Pope who sells the Vatican's treasures to help a starving China and prevent a nuclear world war.  There are some side plots and stories as well that are worthy in and of themselves.  You can read a synopsis of the movie here.

One of the things that's memorable to me from that story line is the idea of the Christian church living into its vows, to care for the "least of these"  written about in the Gospel of St. Matthew 25:1-46


1 Then shall the kingdom of heaven be likened unto ten virgins, which took their lamps, and went forth to meet the bridegroom.

2 And five of them were wise, and five were foolish.

3 They that were foolish took their lamps, and took no oil with them:

4 But the wise took oil in their vessels with their lamps.

5 While the bridegroom tarried, they all slumbered and slept.

6 And at midnight there was a cry made, Behold, the bridegroom cometh; go ye out to meet him.

7 Then all those virgins arose, and trimmed their lamps.

8 And the foolish said unto the wise, Give us of your oil; for our lamps are gone out.

9 But the wise answered, saying, Not so; lest there be not enough for us and you: but go ye rather to them that sell, and buy for yourselves.

10 And while they went to buy, the bridegroom came; and they that were ready went in with him to the marriage: and the door was shut.

11 Afterward came also the other virgins, saying, Lord, Lord, open to us.

12 But he answered and said, Verily I say unto you, I know you not.

13 Watch therefore, for ye know neither the day nor the hour wherein the Son of man cometh.

14 For the kingdom of heaven is as a man travelling into a far country, who called his own servants, and delivered unto them his goods.

15 And unto one he gave five talents, to another two, and to another one; to every man according to his several ability; and straightway took his journey.

16 Then he that had received the five talents went and traded with the same, and made them other five talents.

17 And likewise he that had received two, he also gained other two.

18 But he that had received one went and digged in the earth, and hid his lord's money.

19 After a long time the lord of those servants cometh, and reckoneth with them.

21 His lord said unto him, Well done, thou good and faithful servant: thou hast been faithful over a few things, I will make thee ruler over many things: enter thou into the joy of thy lord.

22 He also that had received two talents came and said, Lord, thou deliveredst unto me two talents: behold, I have gained two other talents beside them.

23 His lord said unto him, Well done, good and faithful servant; thou hast been faithful over a few things, I will make thee ruler over many things: enter thou into the joy of thy lord.

25 And I was afraid, and went and hid thy talent in the earth: lo, there thou hast that is thine.

26 His lord answered and said unto him, Thou wicked and slothful servant, thou knewest that I reap where I sowed not, and gather where I have not strawed:

27 Thou oughtest therefore to have put my money to the exchangers, and then at my coming I should have received mine own with usury.

28 Take therefore the talent from him, and give it unto him which hath ten talents.

29 For unto every one that hath shall be given, and he shall have abundance: but from him that hath not shall be taken away even that which he hath.

30 And cast ye the unprofitable servant into outer darkness: there shall be weeping and gnashing of teeth.

31 When the Son of man shall come in his glory, and all the holy angels with him, then shall he sit upon the throne of his glory:

32 And before him shall be gathered all nations: and he shall separate them one from another, as a shepherd divideth his sheep from the goats:

33 And he shall set the sheep on his right hand, but the goats on the left.

34 Then shall the King say unto them on his right hand, Come, ye blessed of my Father, inherit the kingdom prepared for you from the foundation of the world:

37 Then shall the righteous answer him, saying, Lord, when saw we thee an hungred, and fed thee? or thirsty, and gave thee drink?

38 When saw we thee a stranger, and took thee in? or naked, and clothed thee?

39 Or when saw we thee sick, or in prison, and came unto thee?

41 Then shall he say also unto them on the left hand, Depart from me, ye cursed, into everlasting fire, prepared for the devil and his angels:

43 I was a stranger, and ye took me not in: naked, and ye clothed me not: sick, and in prison, and ye visited me not.

44 Then shall they also answer him, saying, Lord, when saw we thee an hungred, or athirst, or a stranger, or naked, or sick, or in prison, and did not minister unto thee?

46 And these shall go away into everlasting punishment: but the righteous into life eternal.


Now, I don't pretend to be a good Christian and in my embrace of minimalism I don't for a moment think I'm saving the world nor is that even a consideration of mine.  My motives are purely selfish: in embracing minimalism, I'm saving myself.

Now it is true I'm part of a tiny religious order.  On a good day there are about half a dozen of us scattered around the country.  We're members of the Order of the Shepherd's Heart, an ecumenical Celtic catholic religious order.  We follow a Common Rule that, among other things, encourages us to live simple, thoughtful, authentic, and intentional lives.  I'm not very good at that either but it's what I strive towards.

In my minimizing I think I worried people and I think they asked others around me questions such as, "Is he dying?" "Is he having a midlife crisis?"  "Is he selling things off because he's going broke and needs money?"  Some even asked me these questions themselves.  My answer was most always the same,  "No," I'd say, "I'm just trying to live into my vows."  And that was a true statement because what I was saying is that I'm trying to live authentically as myself, my whole self.

That's the thing that comes to my mind when I watch the film "The Shoes of the Fisherman" and see Pope Kiril, played by Gregory Peck, living into his vows as Pope of the Roman Catholic Church and as a Christian.  He put his money where his mouth was or rather he put the money of the church where its mouth was.  And for that, crowds cheer in St. Peter's Square.

Now it's easy to pick on institutions whether it's the Roman Catholic Church, Walmart, or some other corporation when they're doing something we perceive as wrong or that goes against our particular values.  How much harder is it to turn that discerning eye upon ourselves?  You know, those institutions are made up of folk and folk are folk and there's nothing queer as folk and that's you and me!  There is no us and them.  There is only us.

Thomas Merton wrote,“For the world to be changed, man himself must begin to change it, he must take the initiative, he must step forth and make a new kind of history. The change begins within himself.”

I think that's the only authentic change we can offer - our own.  And it we strive to do that, we may not change the world on a grand scale the way Pope Kiril did in the movie, but we'll change our world and that's real.  That's authentic.