I've been biking for about 45 years, as of this coming June.  I received my first bike ever as a birthday present when I turned four in 1973  It was an early 1960's Metallic Green Schwinn Typhoon.

My father had purchased it or traded for it on the road.  He was an over the road truck driver or rather a mover all his life and he had picked up the bike during a long haul.  He touched up the metallic lime green paint and put a new red seat on it.  He also covered it with state stickers for every sate he had been in during that particular run.

It was absolutely amazing - a bike all my own - with sparkle streamers no less!  It was perfect, except that it was made for a teenager and not a four year old.  To even hope to attempt to ride it I had to put two bricks on each pedal.  Needless to say, pedaling it was near impossible.  Lucky for me, our yard was sloped from front to back and we had a deep lot.

I would push my bike to the edge of the gravel driveway and as I attempted to hop on, I'd give it a shove in an attempt to ride it.  After lots of bloody lips, scraped knees, and bruised elbows I could finally balance and ultimately ride that bike down the slope of the yard to the rosebush thicket in back where I learned how to jump off a bike and roll. I don't remember how long it was before I could pedal that bike but I do remember the upgrade I made to it when I could, again thanks to my father: "Fun Kie Feet" bicycle pedals!  Joy of joys, I could ride barefoot and I did, for years.

My mother and father separated two years later and I wouldn't see my father again until I was in my 20's. That was probably the only gift my father gave me until we were reunited but it was a gift that would forever change my life!

I don't know how long that bike lasted.  It was older and well worn when I got it and the fenders were wicked sharp.  After some pretty serious injuries and some mechanical issues my mother replaced the bike with a newer used bike more suited to my age.  It was a Schwinn Stingray with sissy bars and a banana seat.  Now this was a bike I could ride and I road it everywhere and I do mean everywhere!

My life as a child was full of other used bikes, most of which had to be painted.  I had a copper colored bike with black banana seat and matching black handlebar grips, a blue and yellow bike but my favorite was a beautiful chrome bike.  It was so handsome and I felt like James Bond on that bike!

My chrome bike was stolen twice.  The first time the next door neighbor stole it back for me but when it was stolen a second time it was gone for good.

I wept.  It was the end of the world!  Until another bike was procured.

Growing up, we never had a car and so I either walked, hopped on the city bus, or I pedaled my way around town - most of the time I chose the bike.

As a teen I had a series of favorite bikes and ultimately graduated to riding ten speeds and great distances.  I would ride 30+ mile rides weekly and about once a year I would participate with a small bike club a neighbor had started and we would do a 100 mile ride through the Ozarks.  I was never without a bike.

That is until I moved to Branson Missouri as an adult.  I stopped riding and didn't ride again for 17 years.  In those 17 years I ballooned to 325 pounds and at 6 foot tall that was pretty serious.  It wasn't until I escaped Branson and moved to Eureka Springs that a bike graced my life again.


A new friend, Dale Caldwell, gifted me with his 2009 Globe Vienna Hybrid, named Dominic, for my birthday.  I don't often covet other people's things but I had coveted his bike and it was love at first sight.

Riding in Eureka Springs wasn't really a viable option for me.  It had been a while since I had been on a bike and with my weight the hills might have very well killed me.  So I started to look at moving to Fayetteville Arkansas which was rumored to be building some amazing bike trails.  After researching the options for better jobs, better schools, better everyday shopping, and bike trails, I decided to move.  Dale moved first and I moved to Fayetteville a month or two later.

To shorten an already long story, I put many, many, many miles on Dominic riding the trails of Northwest Arkansas.  In the process I lost 80-100 pounds.  And it was pure joy.  In many ways, that wonderful bike saved my life and changed me forever.  I decided that as long as it was within my power, I'd never again be without a bike.

I had Dominic for about 4 years and then he found a new home with a fellow who was almost in the same situation as I had been in when I started riding again.  I hope they have been happy together. 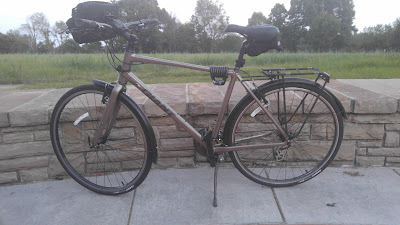 My next bike was a 2017 Giant Escape City.  It was the first new bike I ever bought for myself and kept but that's a whole other story.

I named him Peregrine and you can read more about him by clicking this link.

I plan on keeping up a running blog and a running vlog on #BikeLife as I explore #VanLife.   Check back often and be sure and visit my YouTube Channel.