VanLife: Day 4 or How I Became a Kelly Girl Glassblower

I find I'm settling into a routine which is a good thing because I'm a creature of habit for the most part.  After four days of #vanlife perhaps I'm beginning to find a balance and a rhythm.

This was the first day that my glass show was fully up and running and that part of the setup work was done.  That's always a good feeling.  Now down to making glass and selling glass. 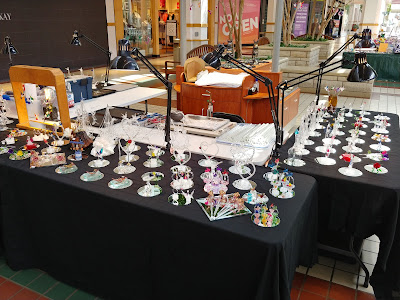 It always fun when I return to a place I have been several times before.  It's often like old home week.  You catch up with friends and acquaintances, see what's new and what's changed.  Sometimes the more things change, the more they stay the same.  I think that's a very true statement for life in a shopping mall.

I spent a great deal of my life working in malls.  My first management position was in a Swiss Colony in the Battlefield Mall in Springfield Missouri and later in a Morrow's Nut House owned by the same company.  Those jobs opened the door to management positions in other stores within that mall and those positions ultimately led me to a General Manager position of a candy company that operated 10 stores in four states, all in shopping malls.

I became acquainted with all aspects of the building, owning, marketing, staffing, supplying, merchandising, maintaining, opening and closing of mall stores.  I worked with lots of different management teams and franchise companies on various construction projects and community marketing programs.

I was what was called a Mall Rat.  I lived and breathed the Mall life.  I was pasty white in those days.

Its funny how life twists and turns.  It was ultimately my familiarity with malls and franchising that I was able to find my way into the glass business.  I had just completed a contract with a company with multiple stores and interests where I had opened and staffed five more dollar stores for them, two in Chicago and one three in Tennessee.  I was ready for a new challenge and I answered an ad in the local paper.

The ad was for someone skilled in opening and franchising stores in shopping malls.  I thought perhaps it was friend playing a trick on me because I had said to him earlier in the week at a dinner party I threw that jobs like mine were getting harder to come by without moving out of the Ozarks.  Out of mere curiosity more than anything I inquired about the position and I realized it was the real deal.

The company had contracted with Kelly Girl, a headhunting/temp agency, to find a suitable candidate for the position.  In order to pursue the job, I had to become a Kelly Girl and so I did.

I eventually met with the owner who was a lampwork glassblower.  He had a little shop up at Lake of the Ozarks in central Missouri and he wanted to spread out his operation to shopping malls and amusement parks.  I knew immediately that I was the person for the job and I also knew immediately that some how, some way, I would become a glassblower.  I sold myself and we arrived at a mutually beneficial contract.  My one caveat was that he teach me how to blow glass and to this he agreed.

Little did I know he was incapable of teaching me how to blow glass.

I fulfilled my part of the bargain.  I used my contacts and expertise to get him into two different malls, two different shopping centers, and one theme park.  I took him from this side of bankruptcy to being relatively financially flush and moderately successful.  In all that time, he never once gave me a lesson.

When I reminded him of his contractual promise, he said,  "You've seen me make enough hummingbirds.  Hop up on the torch and make one."  And then he walked away. 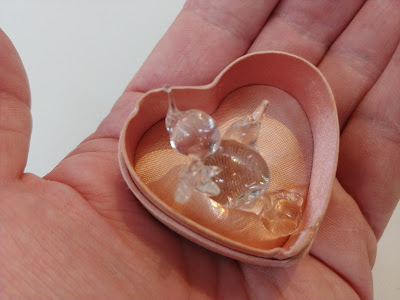 I hopped up on the torch and made what look like a fledgling hummingbird just hatched out of the egg that had been subjection to radiation poisoning.  I wasn't pleased with my finished product but I was excited about the possibilities.

He returned only to puff himself up after looking at my attempt at making a hummingbird suncatcher and say, "I've been doing this long enough to know whether a person has an aptitude for glassblowing or not and I'm sorry to tell you, you'll never be a glassblower and that little mess will never hold together."

It's odd how a person can at once experience and the cold chill of dismissal or indifference and the fiery heat of rage.  Right then I dismissed him and his opinion and raged at his words.  I simply replied,  "Squat and watch fella!"

I left his employment with a white hot self-righteous indignation and a forged determination to become at glassblower, come what may.

It took a while.  There was no YouTube in those days and the craft was pretty secretive.  If someone knew you wanted to learn to make glass and you were watching them, they'd shut down on you in a heartbeat. I wasn't sure where or how I was going to learn the craft but I knew I would.

In the meantime I went back to doing what I do, managing stores in malls.  I took a position with Bailey, Banks, and Biddle Fine Jewelers which worked its way into management training.  They were part of the Zales Corporation which had just emerged from bankruptcy and they were in the process of closing some of the less profitable stores. They wanted me to become a store closer.  This wasn't something I wanted to do because I fundamentally disagreed with their methods though I understood their need to do it the way they did.

During one Christmas the mall leased out a kiosk space in front of my store and low and behold, they had leased it to a lampwork glassblower.

It was one of those moments that the 19th century British author, Charles Williams, would describe as an infinite moment: a moment that if recognized and seized could change the course of one's life forever.

I soon met the glassblower and I kept my mouth shut.  He, on the other hand, did not.  His name was Jerry Capel and he was warm, inviting, inquisitive, talkative, and full of zeal.  He had also been blowing glass for about 40 years at the time of our meeting.  He saw in me my appreciation and attention to the glass but I let him approach me about me learning how to blow glass.  I didn't want him to shut down on me like the rest had.

Let me back up a bit, while I hadn't met him, I had seen him in my former employer's gallery several times, so I knew who he was but my former employer had made it a point to keep us from meeting.  I was soon to understand why he had kept us apart.

As we got acquainted, I shared with Jerry the story I shared with you dear reader, of my escapades with the fellow who told me I'd never be a glassblower.  That was one of the few times I would see regret in my new friend's eyes.

Jerry told me the story of teaching my former employer only a year or two before and suddenly I understood what had happened.  I had unwittingly been duped by a person who was not what he portrayed himself to be at the time and he was not capable of teaching me how to blow glass because he hardly knew how to do it himself.  He used me and his usury was premeditated.

My new mentor however, was capable and more over he was eager to teach me.  He loved glass and would share his talent and expertise with anyone who would sit still long enough to listen and watch.  Seldom have a met in my life people with such a zest and passion as he had.  We became student and teacher and good friends as well and developed a relationship that lasts to this very day.  He didn't teach me everything I've learned about glass art but he taught me everything I needed to know to be successful at it and imparted his passion to me.  For that, I will be forever indebted to this man who changed my life in a moment.


I soon quit my job and never went back to managing stores and businesses for other people.  I became a glassblower and the following year I had my own little booth at a mall for Christmas.  My journey started 28 years ago as of this writing and the rest, as they say, is history.