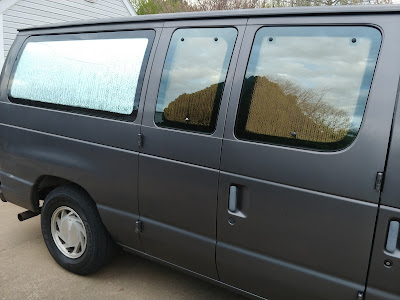 So as it turns out the blackout panels and the curtain were the most expensive  endeavor for the van.  I'll detail my final cost in an upcoming post.

For the blackout panels I used "plastic cardboard" or corrugated plastic sheets and Reflectix reflective insulation. 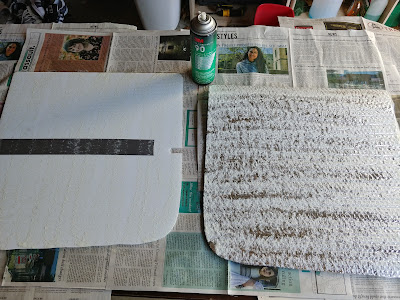 I cut the plastic panels to size and then used 3M Spray Adhesive Hi-Strength 90 to laminate the Reflectix insulation on both sides.  I used the 90 because it was heat resistant and I thought that perhaps that might be better given that the panels would go in the seven windows in the van. 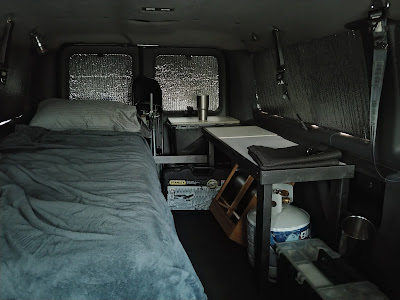 I used craft paper to trace the pattern of the windows and then transferred that pattern to the plastic sheet and cut it out with an xacto knife.  The panels fit really tightly so I added gorilla tape pull tabs to each of them to help in removing them from the windows.  All in all, it worked well and took about two days to complete at a cost of about $120. 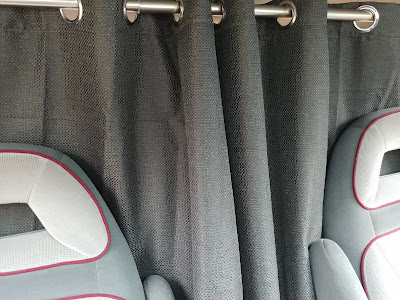 The black out curtain I lucked into in the clearance isle of a Wal-Mart.  They were standard curtain panels of about seven feet tall.  I cut them down to about four feet and hemmed them with permanent fabric glue.  I hung them from a tension rod between the cab and the cargo area.  The three foot remnants I also hemmed and kept for possible future use. The curtains were on sale for about $20 each and I used two panels.  With the fabric glue and tension rod my cost was $56.  This brings my total to around $176.

Honestly, this was the most challenging part of the buildout but one that I'm very pleased with in the end. The panels fit surprisingly well and the curtains are perfect.  I'm also glad that I doubled the amount of Reflectix I used.  I like the way it looks on the inside and it does double duty as insulation.

The Kraken is one step closer to #VanLife!