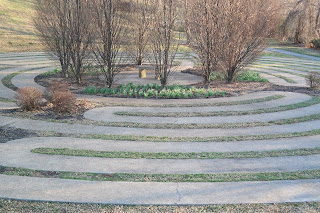 About two months ago, the end of November, I made a post on Facebook and many of my friends thought I was speaking to them directly and there was no small amount of explaining to be done.  I told them that I'd make a more indepth blog entry about the offending post sometime in the future.  This is that sometime...

Prior to my offending post, a clergy friend asked an innocent enough and well meaning general question on their Facebook page and it was something along the lines of:


"To my clergy friends: Who do you seek out for counsel or goto for confession? A psychologist? Someone in the church? A Spiritual Director?"

As someone who had been involved deeply in the church for years and who had indeed reached out to several other clergy folk during times of difficulty or crisis in my life, only to have the situation made much worse by said clergy people, the question hit me wrong.

In fact I had, just the day before, experienced such a heartbreak and betrayal - that once again tore through my faith in clergy folk in general and certainly in this clergy person in specific.

Without getting into too many of the details, this last fall I experienced a crisis like few others in my life and I was in process when a clergy person I trusted enough to turn to, seemingly turned on me.

Now, in fairness to them, I was a raw nerve and perhaps they didn't mean to attack me but from my perspective, it sure felt like they attacked me none the less.  In anger, they faulted me with how I handled my crisis and said as much.  Unable to process their anger and my crisis at the same time, I recoiled from them in a self-protective sort of mode.

Now this clergy person was always one passing along "safe space" messages on their Facebook page and priding themselves on their ability to provide sanctuary to the hurting.   I remember thinking at the time of my own trials and troubles, "well, some safe-space they offer indeed!"


"Reminder to anyone that my house is a safe zone. Coffee can be on in minutes, or if you prefer tea or soda, no problem. I will always be available - even if we haven’t talked in a while. Even if you think it's weird, or we aren't on speaking terms. Text me, call me, message me, anything. I will be there. I am always a shoulder to cry on and an ear to listen. Nothing is worse than being alone and going through things alone."

The post, though it was originally posted on an innocent clergy person's page, hit me wrong and tore open an already wounded place in my heart.  I began to think about my various encounters with clergy folk over the years who claimed to offer "safe-space" but in fact offered anything but and I composed my own post for my Facebook wall with them in mind...


I rewrote a popular post going around this month to better reflect my own personal sentiment. 😉 🤣

Reminder to ANYONE that my house is not a safe zone because in fact, it's not a house but a van. I live in a 19 foot van. 😐 I don't do coffee so you're out of luck there. If you prefer tea or soda, I don't have a way to make tea either and I don't keep soda in the van. Regardless, whatever liquid you might find to drink would be the same temperature as it is outside because I have virtually no climate control.

If we haven’t talked in a while, please don't bother me now. If you think it's weird, or we aren't on speaking terms, these are good reasons to leave me alone. Text me, call me, message me, anything and you may or may not hear back from me but don't hold your breath. I'm not at your beck and call.

If you need a shoulder to cry on and or an ear to listen, keep looking and good luck. Nothing is worse than being alone and going through things alone except having people continuously trying to dump their problems on you when you have enough of your own! Good luck!

I felt my post was perhaps more honest than the endless and meaningless "safe-space" prattle offered by clergy across the Facebook platform.  What's more, I thought my renditionion very funny, in a tongue in cheek sort of way.

Oh dear...  So many of my friends thought I was talking to them personally.  To those of you who thought that, I apologize.  Sometimes my humor can be very subtle albeit stinging. What else can I say except, please forgive me, sarcasm is my native tongue.

To my former colleagues  within the clerical realm.  Please, if you are going to build your ministry upon a "safe-space" model please be sure that's what you're actually practicing and not simply offering lip service to a trendy phrase that looks good on your Facebook wall.  There are hurting people out there who need a safe-space and if you're not really offering such a space, you'll do more harm to your cause and to their heart than you know.