The Seal of Confession 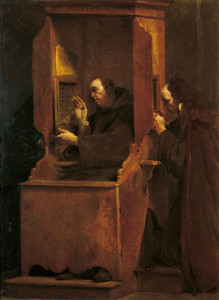 A friend and mentor of mine once said,”you can pay $100 for a visit to a psychologist or for a nickle in the collection plate you can get the counsel of a priest, confession, forgiveness and reconciliation. While my mentor was not trying impugn psychologists in any way nor was he trying to sell the sacrament of a nickle, he was in fact making a rather astute if not cute observation. That for the Cure of our Souls we need turn only to the the Sacraments of the Church and God’s infinite love and confession, forgiveness, and reconciliation are a constant requirement to live a balanced and grace-filled Christian life.

It is through the priest that the penitent comes seeking understanding, counsel, guidance, and ultimately forgiveness for the sin in his or her life. It is through the priest and the Sacrament of Confession that a penitent’s sins are absolved by God. This is one of the sacred acts that sets us apart from the Protestant church and this relationship between priest and penitent must be held to the highest standard and strictest confidence.

When a priest violates this sacrament, violates the Seal of Confession, he or she throws away his or her priesthood, by breaking sacred vows, and by breaking the intimate trust placed in him or her by the penitent. What would the world of the church be like if the Seal of Confession was simply a quaint custom and the confessor free to spread around shared confidences as he or she saw fit? Who would ever trust such an irresponsible and heartless “priest” with anything again? No one would of course and the Sacrament of Confession would be useless, and the offending cleric’s priesthood simply make-believe.

One of the older catechisms taught that the lowest level in hell was reserved for the priest who broke the Seal of Confession and I believe this to be so. though perhaps in a metaphorical sense. I hold the Seal of the Confession inviolable and I hold the priests under my episcopal protection subject to do the same as should all bishops and priests worth their salt.

Regarding the sins revealed to him in sacramental confession, the priest is bound to inviolable secrecy. From this obligation he cannot be excused either to save his own life or good name, to save the life of another, to further the ends of human justice, or to avert any public calamity. No law can compel him to divulge the sins confessed to him, or any oath which he takes — e.g., as a witness in court. He cannot reveal them either directly — i.e., by repeating them in so many words — or indirectly — i.e., by any sign or action, or by giving information based on what he knows through confession.

The only possible release from the obligation of secrecy is the permission to speak of the sins given freely and formally by the penitent himself. Without such permission, the violation of the seal of confession would not only be a grievous sin, but also a sacrilege. It would be contrary to the natural law because it would be an abuse of the penitent’s confidence and an injury, very serious perhaps, to his reputation. It would also violate the Divine law, which, while imposing the obligation to confess, likewise forbids the revelation of that which is confessed. That it would infringe ecclesiastical law is evident from the strict prohibition and the severe penalties enacted in this matter by the Church.

“Let him beware of betraying the sinner by word or sign or in any other way whatsoever. . . we decree that he who dares to reveal a sin made known to him in the tribunal of penance shall not only be deposed from the priestly office, but shall moreover be subjected to close confinement in a monastery and the performance of perpetual penance” (Fourth Lateran Council, cap. xxi; Denzinger, “Enchir.”, 438).

Furthermore, by a decree of the Holy Office (18 Nov., 1682), confessors are forbidden, even where there would be no revelation direct or indirect, to make any use of the knowledge obtained in confession that would displease the penitent, even though the non-use would occasion him greater displeasure.

These prohibitions, as well as the general obligation of secrecy, apply only to what the confessor learns through confession made as part of the sacrament. He is not bound by the seal as regards what may be told him by a person who, he is sure, has no intention of making a sacramental confession but merely speaks to him “in confidence”; prudence, however, may impose silence concerning what he learns in this way. Nor does the obligation of the seal prevent the confessor from speaking of things which he has learned outside confession, though the same things have also been told him in confession; here again, however, other reasons may oblige him to observe secrecy.

The same obligation, with the limitations indicated, rests upon all those who in one way or another acquire a knowledge of what is said in confession, e.g., an interpreter who translates for the priest the words of the penitent, a person who either accidentally or intentionally overhears the confession, an ecclesiastical superior (e.g., a bishop) to whom the confessor applies for authorization to absolve the penitent from a reserved case. Even the penitent, according to some theologians, is bound to secrecy; but the more general opinion leaves him free; as he can authorize the confessor to speak of what he has confessed, he can also, of his own accord, speak to others. But he is obliged to take care that what he reveals shall cast no blame or suspicion on the confessor, since the latter cannot defend himself.

In a word, it is more in keeping with the intention of the Church and with the reverence due to the sacrament that the penitent himself should refrain from speaking of his confession. Such, undoubtedly, was the motive that prompted St. Leo to condemn the practice of letting the penitent read in public a written statement of his sins (see above); and it needs scarcely be added that the Church, while recognizing the validity of public confession, by no means requires it; as the Council of Trent declares, it would be imprudent to prescribe such a confession by any human enactment.

Posted by Brian Ernest Brown at 9:25 AM